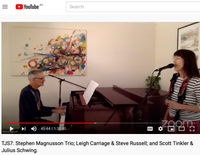 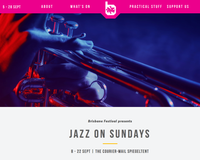 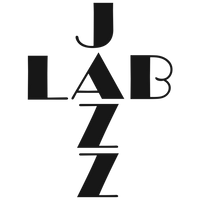 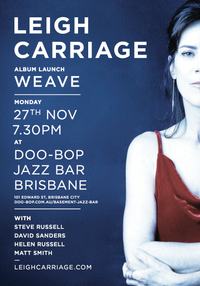 Leigh Carriage celebrates the launch of ‘Weave’ turning a corner and opening a door into a whole other world of musical offerings on her new album. An exceptional and unique Australian voice, she weaves intriguing melodies and stories that take you on a compelling journey. Coupled with a gorgeous tone and wonderful intonation - she is without a doubt a leader in the upper echelons of the wonderful Australian jazz firmament. Her fifth album following on from the success of her highly acclaimed Mandarin Skyline. Ensemble: Helen Russell, David Sanders, Steve Russell, Matt Smith.

Following the great success of our inaugural Festival in 2016 we are delighted to announce that the Brisbane Vocal Jazz Festival will again take place from Thursday 3 August -Sunday 6 August 2017.

This year Festival Director – Ingrid James – will be able to use all the experience gained from our first event in creating an even more popular gathering of some of the finest jazz voices from Queensland, interstate and abroad.

Although jazz has its roots in the influence of the late 19th and early 20th century popular American musical forms, it was soon embraced in every other part of the world and especially in Europe. Almost every country has gone on to develop its own jazz ‘signature’ and so we are fortunate to have been able to secure one of the top vocal duos from Poland as our headline act this year. 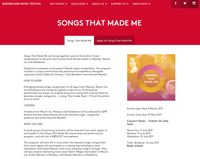 Queensland Music Festival 'Songs That Made Me'

Songs That Made Me will bring together some of Australia’s finest songstresses to discover and nurture local female talent in Mackay, Mount Isa and Gladstone. Designed to empower and support female singer-songwriters, the program involves a unique mentorship and performance experience alongside signature artists Deborah Conway, Clare Bowditch and Hannah Macklin.

This program will kick off in June when the selected singer-songwriters from each region will participate in a mentoring workshop in their hometown with Katie Noonan and music educator Leigh Carriage.

They will also receive mentoring from local talent: Megan Sarmardin in Mount Isa, Kristin Berardi in Mackay, and Hayley Marsten in Gladstone.

The Live Program with Helen Russell and Steve Russell 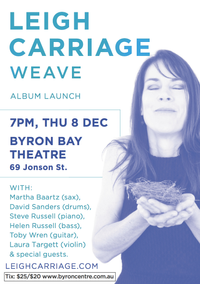 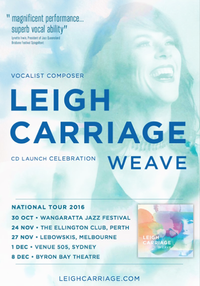 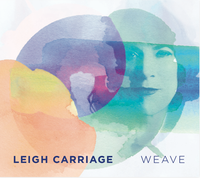 Lebowskis: Shining a spotlight on the best and brightest in Melbourne jazz and improv. Danny Fischer (drums), Carl Mackey (saxophone), Stephen Magnusson (guitar), Steve Russell (piano) and Frank Di Sario (bass). Entry is only $10, or $5 (concession) to all gigs, unless otherwise specified. 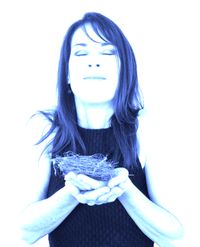 Following up on her highly acclaimed “Mandarin Skyline” which drew a nomination for the 2014 Australian Bell Awards, this outing sees Carriage digging deeper into her past and drawing upon her vast knowledge of genres. Blessed with stunning crystal clear tone and pitch her nuanced delivery, masterful story and compositions mesh divinely, weaving stories ancient and new. There’s a timeless quality to her singing, likened to water flowing over river stones. 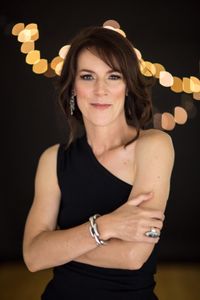 Having just returned from Melbourne where she has recorded a brand new original album with mighty local players, Leigh will be presenting some of her new tunes tonight with her superb trio.

Come down for an exquisite and exciting night of music.

My parents were weavers; my father the repairer of broken toys, car engines and skinned knees, my mother weaved wools, fabrics and healing words, and weaved her magic in the soil. Much like them I too weave - melody and word, and together David, Thierry and Steve we weave songs. Joni Mitchell wrote we are 'condemned to wires and hammers, strike every chord that you feel'. Please come to an evening of music weaving combining wood, metal, muscle and wire. DAVID SANDERS (WOOD, METAL, PEDALS, SKINS 'N' STICKS) THIERRY FOSSEMALLE (WOOD and LONG WOUND WIRES) STEVE RUSSELL (WOOD, PLASTIC, WIRES, SPEAKERS and PEDALS) LEIGH CARRIAGE (METAL, WIRE, SPEAKERS and MUSCLES)

My parents were weavers; my father wove wire in broken toys, car engines and cassette machines, and weaved healing on skinned knees, my mother weaved fabrics, wools and weaved her magic in the soil. Much like them I too weave - melody and word, and together with David, Thierry and Steve we weave songs. Joni Mitchell wrote we are 'condemned to wires and hammers, strike every chord that you feel'. Please come to an evening of music weaving combining wood, metal, muscle and wire. 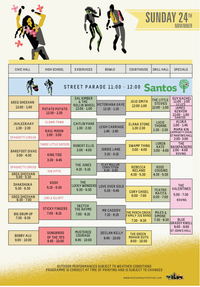