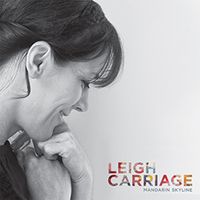 'This first album of her originals was recorded in Sydney with some top-flight musicians, including bassist Jonathan Zwartz, drummer Hamish Stuart and guitarist Matt Smith as the foundation trio on all tracks. Carriage has a pure, clear voice in a style vaguely reminiscent of Joni Mitchell.'

'Australian singer/composer Leigh Carriage's first album of original compositions is a personal odyssey inspired by themes of love lost, new beginnings, hope and perseverance'. 'A quartet of some of Australia's finest jazz musicians lends simpatico support to Carriage, whose crystal-clear vocals have a soothing, soulful quality.'

Ian Patterson All About Jazz NY

'A wonderfully realized, collaborative effort by an outstanding ensemble headed by a gifted vocalist. This album has an almost seamless flow and ethereal quality to it. It’s an outstanding, creative accomplishment.'

'Carriage presents a collection of 10 original songs, offering both melodic and lyrical interest, and she sings her lyrics with impressive accuracy and feeling. I have seen her voice described as reminiscent of Joni Mitchell’s – you certainly wouldn’t mistake the two singers, but it gives some idea of her grace and natural range.'

"I loved your gig! Really interesting tunes and great words...I went on the journey with you completely....(I love the Neumann - it really suits you).” Katie Noonan

"Just listened to your CD [Mandarin Skyline]. Beautifully done, and congratulations to all of you. You've got a great voice, beautiful." Iva Davies (Icehouse)

"I absolutely love the album (Mandarin Skyline) by the way. Beautifully mixed and really moving and powerful with great performances! Scott Aplin

"Leigh I just watched your you tube videos of your launch in Byron Bay! So amazingly gorgeous! Your voice soars! Love it!!!" Inga Liljestrom

"Fans of Joni Mitchell will want to cast their ears upon the work of Leigh Carriage, a singer from Byron Bay, caught live with a drumless trio." John Shand music critic for The Sydney Morning Herald and author of Jazz - The Australian Accent.

"Your set at Bangalow Jazz Festival still resonates with me. You are one of my favourite singers. I used to play New York Minute over and over from your record." Julie O'Hara

"What a treat to hear a vocalist that makes me want to hear it again immediately!!! Great musicianship, great performances. Just lovely!" Kristina Olsen

"I wish to congratulate you on the magnificent performance given by you and you band of talented musicians at the 2011 Brisbane festival…you drew the second biggest crowd ever to attend the series…I had numerous patrons commenting to me on your professional delivery and superb vocal ability.. .you touched many hearts." Lynette Irwin: (President of Jazz Queensland)